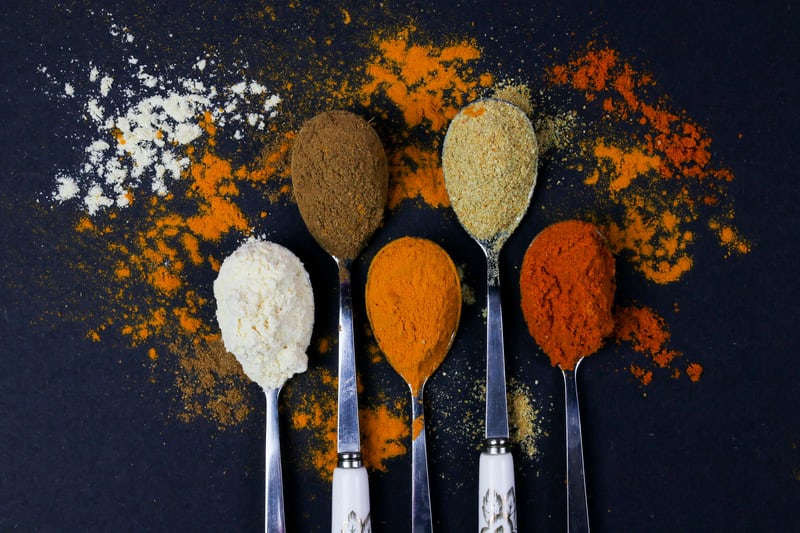 When we hear about Indian cuisine, the first thing that comes to mind are the various spices that make their cuisine delicately flavorful. It is quite a surprise, but the average Indian kitchen can stock up to 100 spices, and even more. These spices are very diverse in their nature and origin and are used across India in different regions to provide a unique taste and aroma to the dishes.

Here is a shortlist of the most common Indian spices.

Turmeric is one of the most common and well-known Indian spices. It is a close relative of ginger and has a distinct yellow-orange colour that makes it the perfect spice for colouring other ingredients. It has a distinct taste, a combination of ginger and lemon, but with a mild citrusy flavour. The most common use of turmeric is in curries. However, it can also be added to rice, soup, snacks, and sauces.

Cumin has a very distinct flavour that is both sweet and smoky. It is a member of the parsley family and has a rather pungent flavour. It is also native to the Mediterranean region and is used in many curries, such as chicken tikka masala or in vegetable curries.

Cardamom is grown in India, Egypt, Indonesia, and South Africa and is cultivated in the Western Ghats. Cardamom is used as a spice and a cooking ingredient as well as a folk medicine ingredient. It has an earthy taste, which is a perfect match for Indian dishes. It is used in a variety of dishes, like chicken dishes and rice.

Fennel, like all other Indian herbs, is a member of the carrot family with a licorice flavour and somewhat sweet and anise-like. It is very popular in the cuisine of Karnataka, Kerala, and Maharashtra and is used in a variety of dishes.

Saffron is the world’s most expensive spice and the most common Indian spice. It is a natural colouring agent used in a variety of dishes like chicken dishes, rice, and vegetables.

Cloves are dried flower buds, and they have a very distinct flavour that is somewhat pungent and sweet. Cloves are used in various types of foods, like a garnish for meat dishes.

Mustard seeds are very commonly used in Indian cooking and are used as a spice and as a condiment. It has a pungent aroma and a slightly spicy taste and is used in a variety of curry dishes.

Fenugreek is a member of the cabbage family and is a very popular spice in India. It is a mucilaginous seed that has a very distinct flavour. It is used in a variety of dishes and is also used as a spice in the preparation of pickles and chutneys. It is also used in curries and vegetable dishes.

Asafoetida is a spice that comes from a plant, the Ferula assafoetida, which is a food plant. It actually has a very distinct aroma and a rather bitter taste. It has been used in India for centuries and is also known as hing.

With so much diversity of Indian spices, it is hard to pick just 10. However, if you need the basics for your home cooking, you can start with these. These are the spices that are used in the average Indian kitchen and in the preparation of their delicious dishes.

Veerji is a family-owned restaurant that brings you authentic Indian food in Chilliwack, British Columbia. Let us satisfy your Indian cuisine cravings with our mouthwatering dishes. Check out our menu today!